This entry is an updated version of “Hospitals” from White Plains, New York: A City of Contrasts.”

St. Agnes Hospital, closed in 2003, had its beginnings in 1908. The medical building on the property underwent renovations and the former hospital was repurposed into an assistive living facility (the Bristol).

The plans to turn the rest of the complex into a retirement community has yet to happen.

A grotto (below) remains near the entrance.

NY Presbyterian Hospital now owns the property where in the 1894 Bloomingdale Hospital opened.  Many of the buildings from the original hospital are still in use. The property of the Hospital used to go from Westchester Ave to Heatherbloom Rd.

The original hospital grounds were designed by Frederick L. Olmsted Company. The main building dates from 1894 and two of the homes that were on the grounds when the property was purchased are still on the grounds. The hospital’s wrought iron fencing still surrounding the property has NY Hospital (Cornell) signs from when they owned the hospital.

A redeveloped city park at the corner of Bryant and Mamaroneck Aves was once apart of the hospital grounds. There are walking trails and signage at the entrance.

Interestingly, the Bloomingdale’s Department Store located on a section of the hospital’s original property is named for the store’s founders, Joseph and Lyman G. Bloomingdale whose father was Bavarian. The store opened in 1975.

White Plains Hospital founded in 1893 was located on Washington Ave on Chatterton Hill with four rooms. Except for the doctor, the staff were volunteers.  At that time Chatterton Hill (now Battle Hill) was part of Greenburgh. 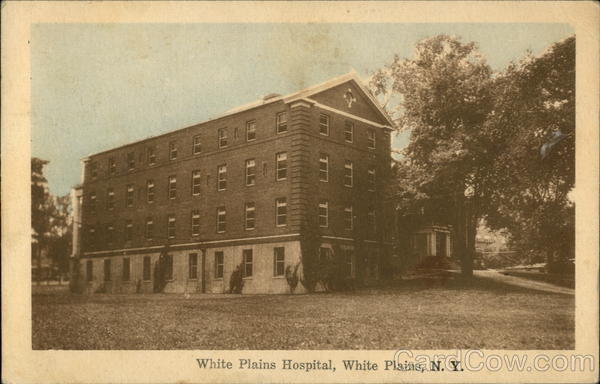 The hospital moved to Fisher House on Lexington Ave in 1897 before moving to E. Post Road in 1907 to a brick structure that was expanded in 1924.
The old structure was demolished and replaced by a new structure in 1939.

Additions were made to the 1939 structure over the years. The taller section of the hospital in the picture below is the 1939 building.

Today the hospital complex extends from Longview Ave to Davis Ave (main entrance) and is between Maple Ave and E. Post Road and is part of the Montefiore Health System. There are new buildings and repurposed ones that make up today’s complex.

The hospital is located on the grounds that were once apart of  Bloomingdale Hospital.  Burke is now part of the Montefiore Health System.

Today, WP has many medical offices/centers and now include Urgent Care centers (for emergencies) that serve the people in the community. There are three hospitals (WP, Burke & NY Presbyterian) that keep expanding their services. Ambulance services are available through 911 call in services with fast moving vehicles that can get to those in need within a short period of time.

City have many paid doctors, nurses and other health professionals but there are still volunteers and those who donate their time to keep our medical facilities available for those in need. Hospitals have reach out programs, lectures and events for patients and those in the community.

During the pandemic of 2020, the Westchester County Center was converted into a hospital and a parking lot a testing center.