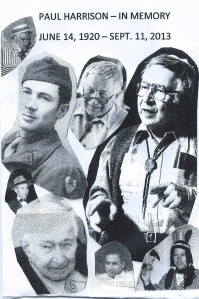 In memory of my father Paul Harrison (1920-2013), my mother celebrates my father’s birthday each June at NEJC. Paul was born on June 14, our country’s flag day. She made a collage last June. We visit him in Valhalla (Sharon Gardens) each year. He died Sept 11, 2013 at the age of 93. He was a WWII Vet and worked for the US Post Office.

Paul’s parents Rita (Vita) Bosloff (alternative names:Boslow or Boslov) and Sam Harrison were born in Russia but they met in US where they had three children: Ray, Paul and Renee. My father was born in Manhattan, NY.

Sam Harrison (died during WWII) had a brother Louie who married Sonia and they had a son named Paul. Rifka was their mother who did come to America and lived with them. Paul Harrison, my father’s first cousin was discovered by my brother who told my Dad that he wasn’t the only Paul Harrison then living in Yonkers. Cousin Paul was living in Yonkers with his wife Barbara (formerly Goldstein) and two children Mark and Leslie. Some ancestor might have had a similar first name for which both cousins were named after but who knows? The two Pauls got reacquainted and even when Paul & Barbara moved to Florida my parents would visit them in the Sunshine State. Harriet and Barbara are not just FB friends but exchange e-mails. Barbara likes to send my mother jokes and interestingly my father used to collect them but stored them in a shirt pocket.

Rita Harrison was one of 8; most were living (7) in the US. Sam and Rita came from different areas of the then Russian Empire before WWI and were married in 1917 in Manhattan. Sam might have come from a village near Kiev but Rita might have come from an area near Moscow or Minsk but this is not backed up by facts. We have no clear explanation for the Harrison surname. One census had Rita’s village listed but I could not read. Could not find their records in Castle Gardens or Ellis Island Data base. Rita’s parents did come to US. Rita’s sisters Pauline, Helen and Rose; brothers Saul, Sam, Ruby and Zelig were living in US. As far as I know, our family had no contact with sister still in Russia.

Ray married Al Zwerling and had two sons, Stanley and Sheldon. Renee, the youngest, married another Paul Krasko and had two children Robert (Bobbie) and Lynn.

Harriet Harrison had one brother Joseph who married Addie. They had two children, Ira and Debra (Debbie). Samuel (Sam) Schild, Harriet’s father had three wives. Ida born in Poland (formerly Cohen, Coco or Kulka), Harriet’s mother (married in 1920) but died when Harriet was 16. Sam’s second wife had an older son but he was living in Japan as a translator. Molly was my Sam’s last wife who outlived him. She had no children and had been married before Sam. Molly outlived Sam by many years and lived in their apartment building next to Dakota in NYC. Molly was born in Russia and when we noticed a letter written by her we noticed that the “h” in Russian looked like an “h.” Could the Harrison surname have been Garrison? But, after research, I deduced that this was not any better as a reason since Garrison is not a Russian name either.

This info is from my research and from what Harriet could remember. Paul refused to talk to me about his history but did like to listen to the tape I made in interviewing her for a Sociology paper. I interviewed Sam Schild and Molly but not sure where the paper or the tapes went. My niece used the tapes for her school project. My DNA is being tested but I have yet to get the results.

My mother sent in comment but it did not get listed so I copied here:

Harriet Harrison quote “Just in case you think your Dad’s childhood was all grime…… it wasn’t…
He and his sister Ray (18 months older) spent a lot of time together with friends… They would cross the George Washington Bridge into New Jersey and hike. I think one time they were actually asked by some authorities who they were but nothing came of it………. Parents of one of the “hikers” expressed worry about their adventures but Paul’s father answered — “Don’t worry – Ray has a map””